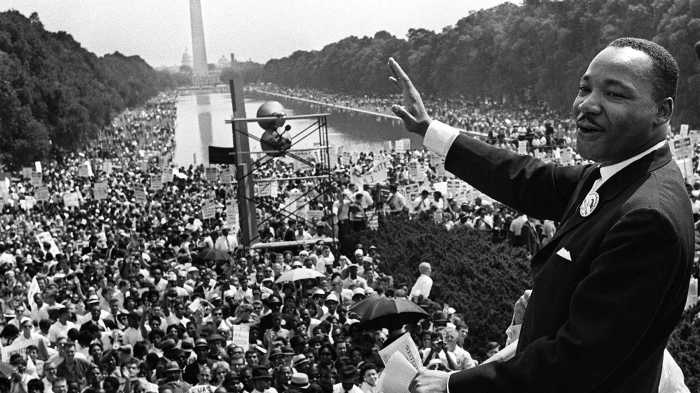 The second you see this photo, I know exactly what runs through your head. You can hear the words as if they’re being spoken directly in your ears. “I have a dream.” Martin Luther King, Jr.’s words echo throughout one of,  if not the best example of a speech that resonates in the history of public speaking. Add to that its persuasive impact — a world wide movement that literally, significantly and powerfully changed the world — and it’s worth all of the attention and analysis it continues to receive.

And… it’s received a lot! It’s worth even more. Watch the speech, then check out some of the great breakdowns on how it was structured, why it resonates and what gives it its persuasive power. Andrew Dlugan from Six Minutes gives a great breakdown of the speech with 5 lessons learned, and Nancy Duarte provides a “sparkline” that you can follow while listening.

What I love most about the speech is the consistent weaving of evocative imagery throughout. Besides the obvious — the repetition of his dream that the world can be a better place, that what is does not have to be — there are other incantations of palpable metaphors. “Drinking from the cup of bitterness and hate” is a biblical reference that instantly connects the audience to a deeper meaning, and my personal favourite is a spin on Shakespeare’s Richard III:

“This sweltering summer of the Negro’s legitimate discontent will not pass until there is an invigorating autumn of freedom and equality.”

Symbols work. They connect, they transform, they resonate. A recent, very powerful example is Beyonce (whom I’ve been told is now referred to as Queen Bey… the Queen to Martin’s King) and her performance at that football game. The berets, the big “X”, the Black Panther salute — all subtly couched in a wildly entertaining dance routine — continue to incite reaction. Even the negative response from some of the world’s smaller minds serves to prove that symbols can be more powerful than words. Interpret them as you will, you cannot deny that they evoke passion and force people to ponder upon their meaning.

Obviously, not every presentation is going to have the scope or the lasting world impact as Martin Luther King, Jr., but we can still look to him for guidance. The man who convinced the world that we can build a better future, who gave us hope that the world could be a better place, also gives us a shining example of how to engage people and inspire them to achieve impossible dreams.